REVOLUTIONARIES: CHE GUEVARA 2018 Mongolia 1oz silver coin: Iconic revolutionary Che Guevara was undoubtedly one of the most significant and recognizable persons of the 20th century. Fighting side-by-side with Fidel Castro in the Cuban revolution it is fitting that his portrait adorns the latest Mongolian coin after Castro and Chinggis Khaan.

“Better to die standing, than to live on your knees.”

As a young medical student, Guevara traveled throughout South America and was radicalized by the poverty, hunger and disease he witnessed. His burgeoning desire to help overturn what he saw as the capitalist exploitation of Latin America by the United States prompted his involvement in Guatemala’s social reforms under President Jacobo Árbenz, whose eventual CIA-assisted overthrow at the behest of the United Fruit Company solidified Guevara’s political ideology. Later in Mexico City, Guevara met Raúl and Fidel Castro, joined their 26th of July Movement and sailed to Cuba aboard the yacht Granma with the intention of overthrowing U.S.-backed Cuban dictator Fulgencio Batista. Guevara soon rose to prominence among the insurgents, was promoted to second-in-command and played a pivotal role in the victorious two-year guerrilla campaign that deposed the Batista regime.

Guevara remains both a revered and reviled historical figure, polarized in the collective imagination in a multitude of biographies, memoirs, essays, documentaries, songs and films. As a result of his perceived martyrdom, poetic invocations for class struggle and desire to create the consciousness of a “new man” driven by moral rather than material incentives, Guevara has evolved into a quintessential icon of various leftist movements. Time magazine named him one of the 100 most influential people of the 20th century,

Customary for this series, the portrait is struck in smartminting© high relief. The amount of detail and sculpture like depths in the portrait are unparalleled. Selective coloring accents the Guevara’s facial features and brings the coin to life.

On the obverse of the coin we find Mongolia Coat of Arms, the weight, the silver fineness, some symbols of life & the value of the coin – 1000 Togrog.

Presented in a custom wooden box tin with an image of Che Guevara printed on the top.  A certificate of authenticity is enclosed.

So what is Smart Minting all about?  A technique allowing hitherto unprecedented levels of intricate relief on smaller coins, amongst many other benefits. Applied to a range of their new coins, CIT (Coin Invest Trust) took the inspired step of using it on a previous release to ably demonstrate the benefits of the process in comparison to traditional strikes. The following was written by coin guru Mik from AgAuNews which sums up the difference nicely,

The new issue is an almost identical design to the 2014 coin, but has a look that is simply worlds apart from its older brother. Sat in the display cabinet on the CIT stand (@the 2016 World Money Fair Berlin), it almost looked like the face of the Khaan was following you around and staring back at you. It’s hard to describe, but it was one of the highlights of the show for me personally … 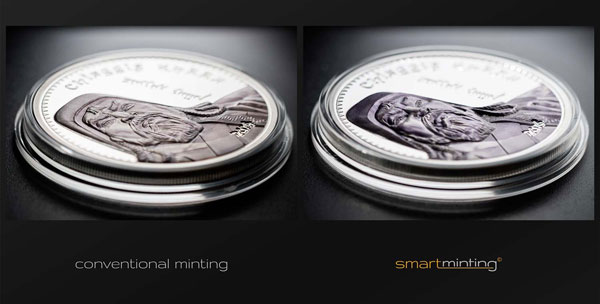